The Register: UCLA trumpets supercapacitor for wearables or implants 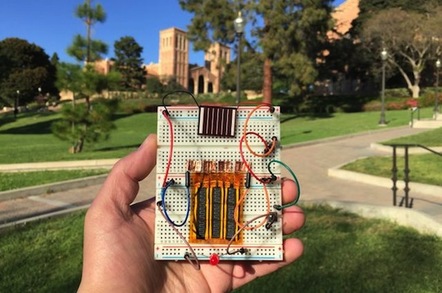 On you or in you, UCLA's got a supercap thin enough for an iWatch or a pacemaker

A hybrid supercapacitor out of UCLA has got the uni's boffins excited, since they claim they've achieved high energy density but in a thinner-than-paper package.

In a paper published at PNAS (abstract), the researchers claim capacitance of more than 1,100 Farads per cubic centimetre – or around 1,145 Farads per gram, which is about as much as they reckon you could get out of the manganese dioxide in the cap.

Using a combination of graphene and MnO2, the researchers say the energy density they can achieve can be as high as 42 Watt-hours per litre, which is getting close to that of a lead acid battery.

It's not much yet: the demonstrator pictured below from the UCLA California NanoSystems Institute is one-fifth the thickness of paper, however it can hold charge long enough to power the demo LED overnight.

That, the university claims, beats a thin-film lithium battery on a pound-for-pound (or rather gram-for-gram) basis.

Manganese dioxide is cheap and plentiful, and is good at storing charge – which is why it's popular in dry-cell batteries and alkaline batteries.

The combination of the MnO2 and laser-etched graphene – the secret sauce in all of this – can be produced without dry rooms or extreme temperatures.

Rick Kaner, UCLA's distinguished professor of chemistry and biochemistry, as well as materials science and engineering, who led the research, might be known to readers of The Register for using DVD burners to produce graphene supercapacitors.

Kaner worked with postdoc Maher El-Kady on the project, and reckons the device just published is good for about 10,000 recharge cycles, and could be implanted in wearable or even implantable devices. ®