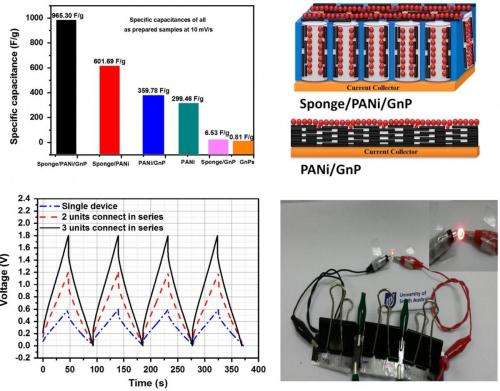 The researchers, led by Jun Ma at the University of South Australia, have published their paper on the kitchen sponge supercapacitors in a recent issue of Nanotechnology.

Although this is not the first time that sponges have been used to make supercapacitors, the idea is still new and not widely used. The study is the first to use sponges as the substrate for a composite of two particular electrode materials: 2-nm-thick graphene platelets, and nanorods made from the conducting polymer polyaniline (PANi). Each material has its own advantages and disadvantages, but when combined they offer the best of both worlds due to their synergetic effects. While the graphene platelets offer high power density but low capacity, the PANi nanorods offer a much higher capacity but suffer from a lower electrical conductivity and other drawbacks.

When combined, the two materials help to "correct" each other's weakness, in a sense. The graphene platelets consist of multiple layers, but usually not all of them are accessible to the electrolyte, which limits capacitance. When PANi nanorods are grown on the surface of the graphene platelets, they act as nanospacers to enlarge the interlayer distance between the platelets to make full use of their storage ability. On the other hand, the highly conductive graphene platelets improve the conductivity of the nanorods by wedging open the PANi fibers to provide more interface with the electrolyte.

"This work reports a novel design for the fabrication of supercapacitor electrodes by taking advantage of the synergy between cost-effective graphene plates, conducting polymers, and kitchen sponge electrodes, resulting in not only excellent capacitance and decent power and energy density, but high capacity retention over 12,000 cycles," Ma told Phys.org. 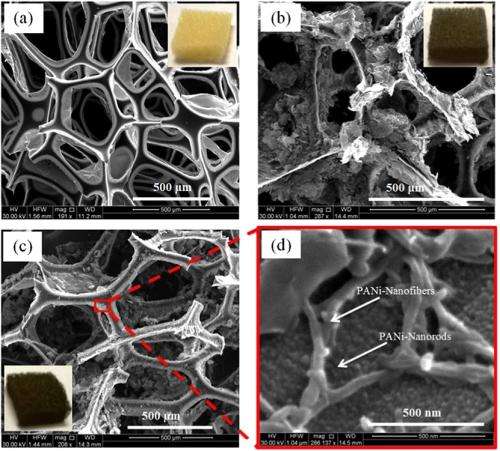 To demonstrate its performance, the researchers connected three of the supercapacitors to power a red LED for five minutes. They hope that this easily fabricated device could have applications where light-weight, low-cost energy storage devices are needed.

"The electrodes developed are flexible and have high performance, so they have many potential applications, especially for bendable, wearable, and portable electronics," Ma said.