(Nanowerk News) Electrochemical capacitors (ECs), also known as supercapacitors or ultracapacitors, differ from regular capacitors that you would find in your TV or computer in that they store sustantially higher amounts of charges. They have garnered attention as energy storage devices as they charge and discharge faster than batteries, yet they are still limited by low energy densities, only a fraction of the energy density of batteries. An EC that combines the power performance of capacitors with the high energy density of batteries would represent a significant advance in energy storage technology. This requires new electrodes that not only maintain high conductivity but also provide higher and more accessible surface area than conventional ECs that use activated carbon electrodes.Now researchers at UCLA have used a standard LightScribe DVD optical drive to produce such electrodes. The electrodes are composed of an expanded network of graphene — a one-atom-thick layer of graphitic carbon — that shows excellent mechanical and electrical properties as well as exceptionally high surface area. 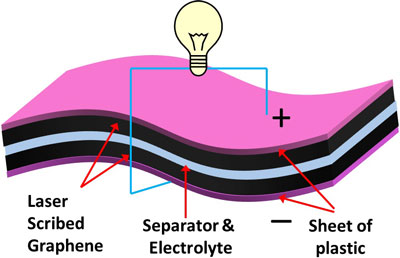 Schematic showing the structure of laser scribed graphene supercapacitors.UCLA researchers from the Department of Chemistry and Biochemistry, the Department of Materials Science and Engineering, and the California NanoSystems Institute demonstrate high-performance graphene-based electrochemical capacitors that maintain excellent electrochemical attributes under high mechanical stress. The paper is published in the journal Science ("Laser Scribing of High-Performance and Flexible Graphene-Based Electrochemical Capacitors").The process is based on coating a DVD disc with a film of graphite oxide that is then laser treated inside a LightScribe DVD drive to produce graphene electrodes. Typically, the performance of energy storage devices is evaluated by two main figures, the energy density and power density. Suppose we are using the device to run an electric car — the energy density tells us how far the car can go a single charge whereas the power density tells us how fast the car can go. Here, devices made with Laser Scribed Graphene (LSG) electrodes exhibit ultrahigh energy density values in different electrolytes while maintaining the high power density and excellent cycle stability of ECs. Moreover, these ECs maintain excellent electrochemical attributes under high mechanical stress and thus hold promise for high power, flexible electronics."Our study demonstrates that our new graphene-based supercapacitors store as much charge as conventional batteries, but can be charged and discharged a hundred to a thousand times faster," said Richard B. Kaner, professor of chemistry & materials science and engineering."Here, we present a strategy for the production of high-performance graphene-based ECs through a simple all solid-state approach that avoids the restacking of graphene sheets," said Maher F. El-Kady, the lead author of the study and a graduate student in Kaner's lab.The research team has fabricated LSG electrodes that do not have the problems of activated carbon electrodes that have so far limited the performance of commercial ECs. First, The LightScribe laser causes the simultaneous reduction and exfoliation of graphite oxide and produces an open network of LSG with substantially higher and more accessible surface area. This results in a sizable charge storage capacity for the LSG supercapacitors. The open network structure of the electrodes helps minimize the diffusion path of electrolyte ions, which is crucial for charging the device. This can be accounted for by the easily accessible flat graphene sheets, whereas most of the surface area of activated carbon resides in very small pores that limit the diffusion of ions. This means that LSG supercapacitors have the ability to deliver ultrahigh power in a short period of time whereas activated carbon cannot.Additionally, LSG electrodes are mechanically robust and show high conductivity (>1700 S/m) compared to activated carbons (10-100 S/m). This means that LSG electrodes can be directly used as supercapacitor electrodes without the need for binders or current collectors as is the case for conventional activated carbon ECs. Furthermore, these properties allow LSG to act as both the active material and current collector in the EC. The combination of both functions in a single layer leads to a simplified architecture and makes LSG supercapacitors cost-effective devices.Commercially available ECs consist of a separator sandwiched between two electrodes with liquid electrolyte that is either spirally wound and packaged into a cylindrical container or stacked into a button cell. Unfortunately, these device architectures not only suffer from possible harmful leakage of electrolytes, but their design makes it difficult to use them for practical flexible electronics.The research team replaced the liquid electrolyte with a polymer gelled electrolyte that also acts as a separator, further reducing the device thickness and weight and simplifying the fabrication process as it does not require special packaging materials.In order to evaluate under real conditions the potential of this all solid-state LSG-EC for flexible storage, the research team placed a device under constant mechanical stress to analyze its performance. Interestingly enough, this had almost no effect on the performance of the device."We attribute the high performance and durability to the high mechanical flexibility of the electrodes along with the interpenetrating network structure between the LSG electrodes and the gelled electrolyte," explains Kaner. "The electrolyte solidifies during the device assembly and acts like glue that holds the device components together."The method improves the mechanical integrity and increases the life cycle of the device even when tested under extreme conditions.Since this remarkable performance has yet to be realized in commercial devices, these LSG supercapacitors could lead the way to ideal energy storage systems for next generation flexible, portable electronics.
0 views0 comments