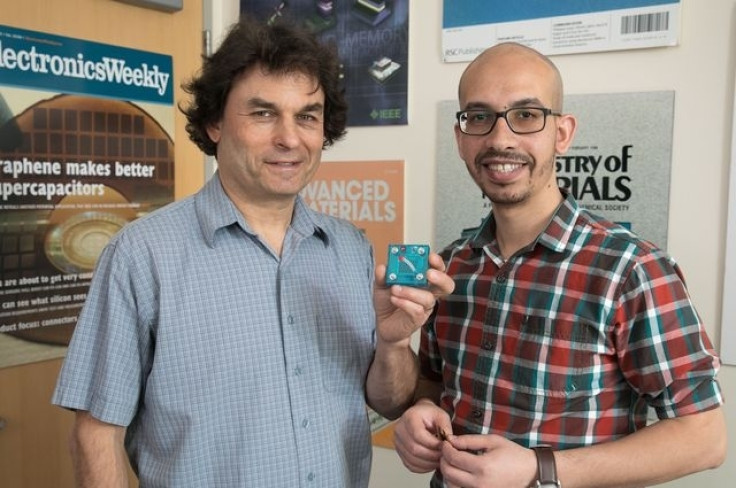 Researchers have created a device that can produce clean hydrogen fuel using solar power and store energy both cheaply and efficiently.

The potentially revolutionary technology could be used to power electronic devices, such as phones and laptops, and could help bring hydrogen cars to the masses by making them much more affordable for consumers.

The prototype device consists of a so-called 'supercapacitor', which stores energy, and a device for splitting water into hydrogen and oxygen. A single solar cell powers the device with the energy generated either stored as electricity in the supercapacitor or chemically as hydrogen.

Combining a supercapacitor and water-splitting technology in a single device is an advance akin to the first time a phone, web browser and camera came together in early smartphones, according to Richard Kaner, one of the designers from the University of California Los Angeles (UCLA).

The researchers say that the technology could be especially useful for producing energy in rural areas and other remote locations, as well as large cities that need ways to store surplus electricity from their electrical grids.

The technology could also have big implications for the popularisation of hydrogen-fuelled vehicles.

"Hydrogen is a great fuel for vehicles: It is the cleanest fuel known, it's cheap and it puts no pollutants into the air – just water," said Kaner. "And this could dramatically lower the cost of hydrogen cars."

This is possible because the device produces hydrogen using elements such as nickel, iron and cobalt which are much more abundant and cheaper than metals that are currently used to produce hydrogen fuels, such as platinum for example.

Importantly, the device can produce hydrogen fuel in an environmentally friendly way. At present, around 95% of hydrogen production worldwide comes from the conversion of fossil fuels gases into hydrogen, which releases large quantities of carbon dioxide into the atmosphere, according to Maher El-Kady, co-author of the research describing the device also from UCLA.

"Hydrogen energy is not 'green' unless it is produced from renewable sources," he said.

The prototype device could comfortably fit in your palm but the team say the technology could easily be scaled-up because the components are inexpensive.

The new technology is described in a paper published in the journal Energy Storage Materials.