h+ magazine: Graphene Production Technique Even You Can Do

I can’t believe I missed this story from a year ago about a new technique for making graphene and the accidental discovery that was made after by the researchers working on the project.

Richard Kaner is a professor of chemistry and biochemistry and UCLA. Maher El-Kady was a graduate student working in his laboratory. Together they developed a technique to fabricate graphene using an everyday DVD burner. Before they discovered this breakthrough graphene was painstakingly harvested using lithography. The volume produced was small and the work was labour intensive.

What Kaner and El-Kady discovered is they could use a consumer product, a LightScribe DVD burner to manufacture graphene on a DVD, producing enough material for 100 micro-supercapacitors on a single disc in less than 30 minutes (seen in the image below). 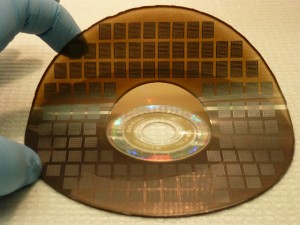 The production process involved gluing a thin plastic layer onto a standard DVD followed by a coating of graphite oxide. They then inserted the DVD into the burner and the laser did the rest of the work oxygenating the graphite oxide and turning it into graphene.

In a video describing their work Kaner and El-Kady found something unexpected. They call it a “eureka moment.” El-Kady using a little piece of their manufactured graphene and a light bulb and a two to three second charge could make the light shine for more than five minutes.

I have written about super capacitors on this blog site before, but it would seem to me that Kaner and El-Kady are on the edge of creating a new energy storage technology that will prove to be a real game changer in the field.

And when discharged your graphene super capacitor, made of carbon will be something that you put in your compost or recycling bin.

Compare that to batteries which when discharged need to be treated as hazardous materials.

In a video describing their discovery, Kaner states, “When I was a kid, I wanted to be a scientist. And so my goal has always been to develop something that will change people’s lives.”

Well I think you’ve done it!

Len Rosen lives in Toronto, Ontario, Canada. He is a researcher and writer who has a fascination with a longstanding science and technology. Len is a futurist, writer and researcher for technology companies making a difference.