EurekAlert: What a mesh

A team of scientists from across the U.S. has found a new way to create molecular interconnections that can give a certain class of materials exciting new properties, including improving their ability to catalyze chemical reactions or harvest energy from light. 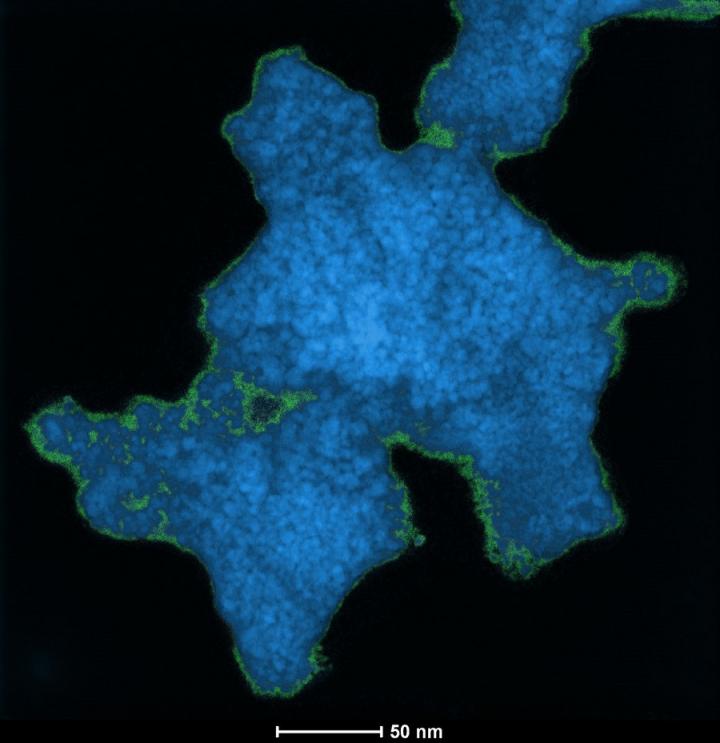 "If we can stitch in these molecules exactly where we want them to be, it will give us a powerful ability to make and understand hybrid materials with a wide range of uses." -- UCLA chemist Alexander Spokoyny

Metal oxides are of interest to scientists because of their unique electronic and chemical properties. Some, like titanium dioxide, are commonly used in photovoltaic and photocatalytic applications because of their ability to absorb light.

The key to forming these metal oxide networks is boron, which when annealed with metal oxides leads to the formation of thermally robust and stable interconnected clusters that act as strands of glue that connect a metal oxide web.

"This glue has the ability to be a key component of the entire reactive system, changing the properties that the metal oxides had on their own," said Alexander Spokoyny, a chemist at UCLA.

The formation of the boron-metal oxide network provides a launching point for future studies of different materials that could combine their own natural properties with the added advantage of a similar "cross-linked" structure.

"We want to know, for instance, if we can transfer our knowledge of this mesh to a material like silicon dioxide. The photocatalytic properties of these materials are extraordinary compared to titanium dioxide," said Argonne chemist Max Delferro.

In the future, the researchers seek to design a way to create precisely tailored materials by perfecting how the interconnecting clusters of boron "glue" are interspersed within the metal oxide. "If we can stitch in these molecules exactly where we want them to be, it will give us a powerful ability to make and understand hybrid materials with a wide range of uses," Spokoyny said.

Because these materials are so new, the researchers believe they have a great deal of untapped potential. "We're not claiming mission fully accomplished by any means; there are still parts of the chemistry that we don't fully understand and appreciate," Delferro said.

The research team included Argonne chemist Karena Chapman, who works at the laboratory's Advanced Photon Source (APS), a DOE Office of Science User Facility. Chapman and Spokoyny met when they were named to Chemical and Engineering News's "Talented Twelve" list in 2016, and established the collaboration that led to the research.

According to Chapman, a member of the Structural Sciences Group in the APS X-ray Science division, the structural characterization of the material involved the use of X-ray pair distribution function analysis carried out at the APS, which gives local structural information about the relative atom positions.

Chapman, Delferro and Spokoyny noted that the efforts of the research team to produce and analyze this new material were just as interconnected as the discovered hybrid material itself. "There are cross-linkages at both the molecular and the human level," Delferro said. "This work proves that we work better and are stronger when we're connected."

A paper based on the research, "A Molecular Cross-Linking Approach for Hybrid Metal Oxides," appeared in the March 5 issue of Nature Materials.

The work was funded, in part, by DOE's Office of Science.

Argonne National Laboratory seeks solutions to pressing national problems in science and technology. The nation's first national laboratory, Argonne conducts leading-edge basic and applied scientific research in virtually every scientific discipline. Argonne researchers work closely with researchers from hundreds of companies, universities, and federal, state and municipal agencies to help them solve their specific problems, advance America's scientific leadership and prepare the nation for a better future. With employees from more than 60 nations, Argonne is managed by UChicago Argonne, LLC for the U.S. Department of Energy's Office of Science.

The U.S. Department of Energy's Office of Science is the single largest supporter of basic research in the physical sciences in the United States and is working to address some of the most pressing challenges of our time. For more information, visit the Office of Science website.

Disclaimer: AAAS and EurekAlert! are not responsible for the accuracy of news releases posted to EurekAlert! by contributing institutions or for the use of any information through the EurekAlert system.