US researchers have developed a supercapacitor technology that can be deposited onto plastic film to make flexible capacitors, and silicon die for in-package energy storage. Specific power delivery is higher than traditional supercapacitors.

Electrical performance is virtually unchanged after thousands of flexing cycles.

Developed by Maher El-Kady and Richard Kaner at the University of California, Los Angeles, the capacitors rely on an expanded form of graphene that has been dubbed laser-scribed graphene (LSG), a novel planar structure, and an ionic liquid electrolyte.

Traditional supercapacitors have two ion-porous electrodes separated by a porous electrically-insulating separator. The whole assembly is soaked in an electrolyte.

The more surface area available in the electrode, the more ions can be held – traditional supercapacitors use ‘activated carbon’ which can have a surface area of up to 1,500m2/g.

At UCLA, researchers take graphene oxide (GO, graphene with oxygen attached to spare surface bonds) in the form of tiny flakes of multi-layer GO, also known as graphite oxide – and treated it with a laser.

The laser both removes the surface oxygen and fractures the flakes into an expanded mass of multi and single-layer graphene with high surface area and high porosity.

Initially the labs made sandwich-type capacitors with two continuous layers of LSG face-to-face.

Its latest devices used interdigitated electrodes – two combs with interlocked teeth – on a single substrate with an electrolyte containing sheet draped over the top.

In a novel use of consumer technology, El-Kady uses the laser (780nm <5mW) of a LightScribe DVD drive to both convert GO to LSG and to draw the interdigitated electrode pattern without using masks. 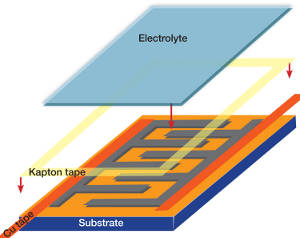 To prepare it for the DVD drive, a layer of the polymer PET is bonded to a CD for support, then coated with a solution of GO particles.

Once dried, the CD is inserted into the LightScribe recorder and the pattern of conductive LSG lasered out of the insulating GO. Multiple over-writes are needed, taking around half an hour per disc.

LightScribe write resolution, said UCLA, is around 20µm and 100 capacitors can be written on one CD.

The resulting LSG is 7.6µm thick with a surface area of 1,500m2/g. This figure is the same as some activated carbon, but the team claims porosity is better with LSG resulting in more instantaneous current and therefore faster charge and discharge.

Over this is laid the electrolyte – in the first instance a hydrogel polymer made from the polymer PVA and sulphuric acid, which allows operation up to 1V.

For a given area, more fingers deliver better capacitors.

If only the volume of active material it taken into account, and not the substrates, said UCLA, capacitance is higher in the interdigitated capacitor design than the sandwich.

Energy density (J/cm3, Wh/cm3) is still short of Li-ion batteries, but it is in the same ball park even with these research devices. Power density (W/cm3) is orders of magnitude better than Li-ion.

By replacing the hydrogel polymer with an ionogel electrolyte – made from an ionic liquid added to a solid – operating voltage can be increased to 2.5V.

With the ionogel, capacitance was unchanged after 30,000 charge-discharge cycles.

Self-discharge from 100 to 50% is 12hr, similar to commercial supercapacitors, said the university.

To prove on-chip energy storage would be possible, the UCLA team also formed supercapacitors directly on an SiO2 layer on a silicon substrate.

The beauty of the UCLA process is that electrodes are formed and patterned in one step.

Other teams have got more performance by adding carbon nanotubes (CNTs) to graphene to make a composite, at the expense of more complicated processes.

A group from the National Institute for Materials Science in Japan reported a rise of 23% energy density and 31% power density when they added single-walled CNTs to graphene, saying that the nanotubes act to improve conductivity, act as a spacer, and bind particles together.