The supercapacitors are known for their high capacity capacitance values, typically about 10,000 farads @ 1.2v. These are electrochemical capacitors capable of storing 10-100x more energy per unit volume or mass compared to typical electrolytic capacitors. They can be charged a lot faster than batteries but the thing that limits their use in modern electronics is their physical size. These super-capacitors are typically 10x larger in size than the regular batteries. The latest advancement in supercapacitors technology comes from engineers at UCLA who have developed a hybrid supercapacitor that bring the best of both batteries and supercapacitors.

The new hybrid supercapacitor developed by UCLA team is capable of storing large amount of energy, enough to run computers and smartphones, recharges within seconds and lasts for over 10,000 charging-discharging cycles. The team has also developed a micro-supercapacitor that is just one fifth the thickness of regular sheet of paper and holds 2x the charge as typical thin-film lithium battery. 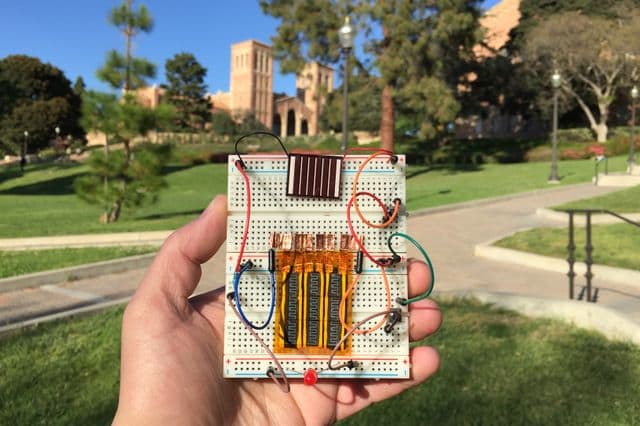 The hybrid supercapacitor uses laser-scribed graphene (LSG) along with manganese dioxide to achieve the desired properties. These can be fabricated without needing extreme temperatures or 'dry rooms' that are typically required during the production of supercapacitors. The research team found that their hybrid supercapacitor can be used to quickly store electric charge from solar cells during the day and then power an LED overnight - to make off-grid street lighting possible.