A team of eleven scientists from UCLA and the University of Connecticut has created a new energy-storing device that can draw electrical power from the human body.

What researchers created is a biological supercapacitor, a protein-based battery-like device that extracts energy from the human body and then releases it inside an electrical circuit — the implantable medical device.

According to a research paper published earlier this month, the supercapacitor is made up by a device called a "harvester" that operates by using the body's heat and movements to extract electrical charges from ions found in human body fluids, such as blood, serum, or urine.

As electrodes, the harvester uses a carbon nanomaterial called graphene, layered with modified human proteins. The electrodes collect energy from the human body, relay it to the harvester, which then stores it for later use.

Because graphene sheets can be drawn in sheets as thin as a few atoms, this allows for the creation of utra-thin supercapacitors that could be used as alternatives to classic batteries.

For example, the bio-friendly supercapacitors researchers created are thinner than a human hair, and are also flexible, moving and twisting with the human body.

Another advantage is that they're made of bio-friendly materials, like graphene, which is a form of carbon, one of the core chemical elements that make up the human body.

Current implantable medical devices operate on classic batteries, inflexible, and built with many toxic materials that can poison or kill its carrier.

The device they created is a supercapacitor, which is a term used to describe high-performance electrochemical capacitors (ECs), a battery-like device that can store energy at much higher power density than classic batteries. Compared to batteries, supercapacitors also have faster charge-discharge rates, lower internal resistance, higher power density, better cycling stability, and the ability to use external fluids as electrolytes.

Currently, the supercapacitor looks primed to be deployed with pacemakers, but researchers hope their technology could be used with other devices that stimulate other organs, such as the brain, the stomach, or the bladder. 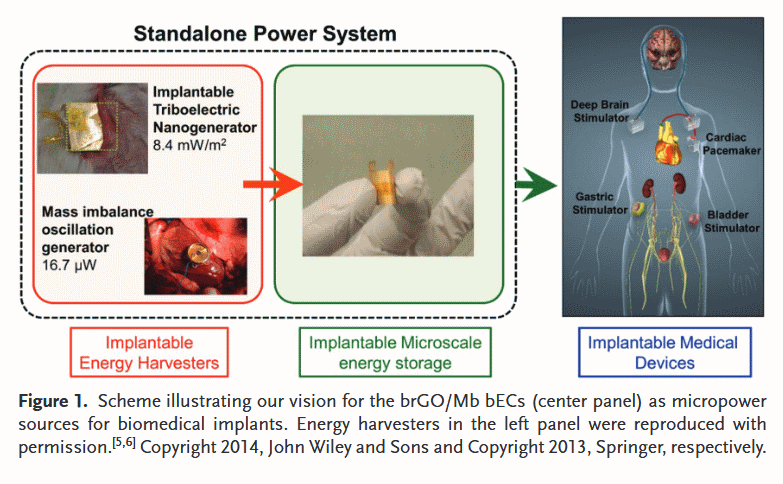