Researchers at UCLA have designed device that can use solar energy to efficiently and economically create and store energy, which could be used to power electronic devices, and to produce hydrogen fuel for eco-friendly cars. 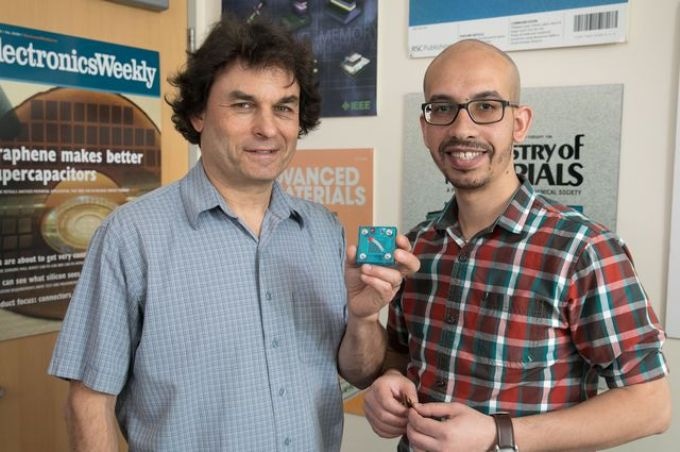 The new device could make hydrogen cars inexpensive for many consumers because it generates hydrogen using cobalt, iron and nickel — elements that are less expensive and much more abundant than the platinum and other precious metals that are at present employed to generate hydrogen fuel.

Hydrogen is a great fuel for vehicles: It is the cleanest fuel known, it’s cheap and it puts no pollutants into the air — just water. And this could dramatically lower the cost of hydrogen cars. Richard Kaner, Senior Author and Distinguished Professor of Chemistry and Biochemistry, and of Materials Science and Engineering, UCLA

The technology could be particularly useful in rural areas, or to military units operating in remote locations. This technology is described in a paper published in the Energy Storage Materials journal.

In addition, it could be part of a solution for big cities that need ways to store excess electricity from their electrical grids.

“If you could convert electricity to hydrogen, you could store it indefinitely,” stated Kaner, who is also a member of UCLA’s California NanoSystems Institute.

Conventional hydrogen fuel cells and supercapacitors contain two electrodes: one positive and the other negative. The device created at UCLA has a third electrode that serves as both a supercapacitor, which stores energy, and as a device for separating water into hydrogen and oxygen, a process known as water electrolysis.

All three electrodes attach to a single solar cell that acts as the power source for the device, and the electrical energy produced by the solar cell can be stored in one of two ways: chemically as hydrogen or electrochemically in the supercapacitor.

The device is also a step forward because it generates hydrogen fuel in an environment-friendly way. At present, about 95% of global hydrogen production comes from transforming fossil fuels such as natural gas into hydrogen — a procedure that releases large amounts of carbon dioxide into the air, stated Maher El-Kady, a UCLA postdoctoral researcher and a co-author of the research.

Hydrogen energy is not ‘green’ unless it is produced from renewable sources. Maher El-Kady, Postdoctoral Researcher and Co-Author of the research, UCLA

He added that using solar cells as well as elements that are abundantly available to split water into hydrogen and oxygen has huge potential for minimizing the cost of hydrogen production and that the method could ultimately replace the existing method, which depends on fossil fuels.

According to Kaner, combining the water-splitting technology and a supercapacitor into a single unit is an advance similar to the first time a camera, web browser and phone were combined on a smartphone. Eventually, the new technology may lead to new applications that even the researchers haven’t considered yet, said Kaner.

The researchers developed the electrodes at the nanoscale — thousands of times thinner compared to the thickness of a human hair — to ensure the largest surface area would be exposed to water, which increases the quantities of hydrogen the device can generate and also stores more charge in the supercapacitor. Even though the device developed by the researchers would fit into the palm of a hand, it would be possible to develop larger versions because the components are affordable, Kaner said.

For hydrogen cars to be widely used, there remains a need for a technology that safely stores large quantities of hydrogen at normal pressure and temperature, instead of the pressurized cylinders that are currently in use. Mir Mousavi, Co-Author of the Paper and Professor of Chemistry, Tarbiat Modares University, Iran

The other co-authors of the paper include Graduate Student Yasin Shabangoli and Postdoctoral Scholars Mohammad Rahmanifar and Abolhassan Noori, all of Tarbiat Modares.